On August 28, 2014, the California Superior Court entered its final decision in the groundbreaking education equality lawsuit Vergara v. California, affirming its tentative ruling that California’s outdated and unworkable teacher tenure, dismissal and layoff laws are unconstitutional. However, the Court stayed its ruling pending appeal, so the laws will remain in place until the Court of Appeal decides the case. The teachers unions and the State have both filed notices to appeal, and while Plaintiffs have requested an expedited appeal process, an appellate ruling could be as far as a year away.

In the meantime, Students Matter, the nonprofit organization that sponsored the nine student plaintiffs in the case, is meeting with education and policy leaders to discuss what laws could replace the current policies to better ensure that every child has a passionate, motivating and effective teacher in every classroom. The decision also has become a critical campaign issue for the Nov. 4 elections, particularly in the race for State Superintendent of Instruction. The incumbent, Tom Torlakson, is a defendant in the Vergara case and a staunch opponent of changing the State’s teacher tenure, dismissal and layoff laws. The challenger, Marshall Tuck, has applauded the brave Vergara plaintiffs and said he would not appeal the decision if elected.
Outside of California, the case has sparked a national conversation about the impact of teacher tenure, dismissal and layoff laws on the quality of students’ education. The editorial boards of 34 different newspapers across the country, including the The New York Times, Los Angeles Times, The Wall Street Journal, USA Today and The Washington Post, have written in support of the Court’s decision. U.S. Secretary of Education Arne Duncan has called on other states to take this opportunity to build new frameworks for the teaching profession that protect students’ rights to equal educational opportunity. 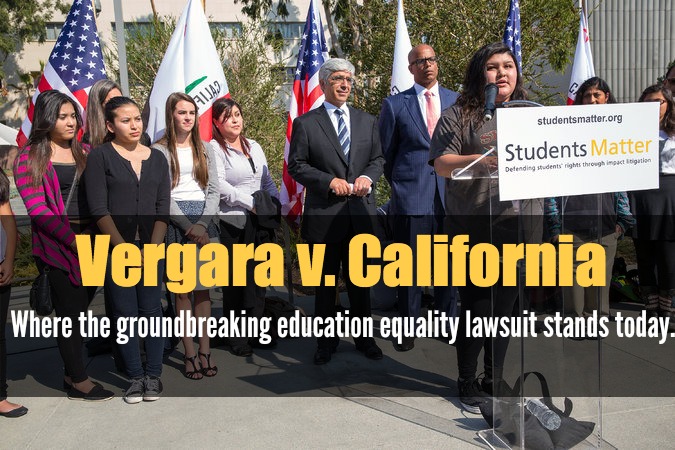 Vergara v. California has opened the door for real and lasting change in California. The work is not over, but we’re off to a historic start.
For more information, please visit www.studentsmatter.org