Is your child attending a FAILING school? You have a RIGHT to know! 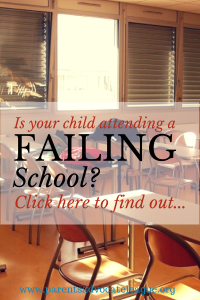 School districts are not informing parents of their right to leave their chronically underperforming schools.

The Romero Open Enrollment Act allows for students attending the bottom 10% of a district’s schools to leave their failing school and choice into a higher performing school. They can even attend a school outside of their school district without having to ask permission to leave. Under this law, school districts are supposed to send letters to families attending these schools informing them their school has been underperforming for the past three years in inform them of their rights under the Romero Act.

Here’s the rub… School districts can apply to the state for a waiver and not inform parents of the fact their school is failing.  This goes against the intent of the law and keeps kids stuck in failing schools, yet many districts are not sending those letters to parents. Parents can still exercise their rights under Romero Act, but few do because they don’t know about it.

PAL would like to help get the word out to parents of these schools and we need our PALS to help.  If you would like to volunteer to help pass out fliers, please contact us at Romney@parentsadvocateleague.org.

Is your school failing?  See the list of schools in OC and LAUSD by clicking HERE.

“How could a California law, enacted by a majority of the Legislature, have just been vanquished? Why were the public – and legislators – not told, allowing us to immediately challenge the legality of that action? Even more stunning, I discovered that this decision had been made nine months ago, but had been kept quiet.”

Click here to read former California Senator and author of the 2010 Parent Trigger Law Gloria Romero’s opinion article as shared in the August 18, 2014 edition of the Orange County Register newspaper.